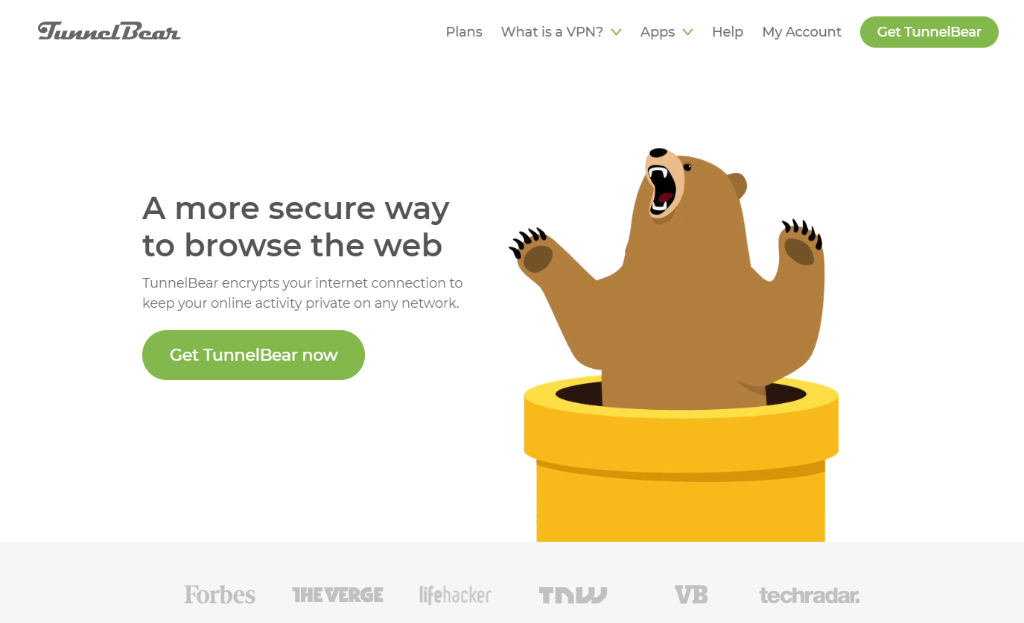 It may feel as though every website on the online platform is out to get its hands on your personal information and surfing patterns.

These days, governments routinely filter content, services are broken up by region, and anonymous web surfing is a past feature.

Get yourself a furry protector if you desire more safe internet use. In 2011, Toronto saw the emergence of TunnelBear from hibernation.

A popular choice for online gamers and P2P file-sharers, it has quickly become one of the most well-known free VPN services.

McAfee owns the software, which may be used for both personal and professional purposes, and provides access to VPN servers in over twenty countries.

To know more about our findings, check out our TunnelBear VPN review.

The apps are also widely available in various app stores for both Apple and Google platforms. The installation process may take some time, but the set-up wizard handles everything.

After installing the program, all you have to do is launch it and enter your account information. Once you’ve done that, you can confidently navigate the Internet.

In addition to P.C.s and Macs, iOS and Android devices can now use TunnelBear. In addition, TunnelBear provides a simple add-on for Chrome and Firefox.

Appearance And Ease Of Use

The company claims that TunnelBear has an exceedingly polished interface. They certainly spent a lot of work on all of the visual details.

In addition, they’ve worked on making VPNs more enjoyable to use. From this, transparent VPN programs emerge.

Using TunnelBear is a delight because it is a lighthearted and attractive piece of software.

The TunnelBear program is not easy to use. The user interface is cluttered with unnecessary customization settings.

TunnelBear has the most detailed privacy policy compared to other VPN services, detailing the data the service does and does not collect.

We mean it when we say this policy is comprehensive, as it explains everything from the cookies used by TunnelBear.com to their names, functions, and expiration dates.

The firm claims that because of this, it cannot associate a user’s I.P. address with a specific action. The plan makes sense to us.

But most of the users claim that their website stores their details.

They use the industry-standard combination of AES-256 cryptography and SHA-256 hashing for security. The United States government has approved this algorithm for secret data use.

For the user, this implies that their connection is secure and that their online activity cannot be easily monitored.

Tunneling protocols allow your gadget to access the VPN server. OpenVPN (TCP/UDP) and IKEv2 are the protocols utilized on Windows and iOS.

Only OpenVPN (TCP/UDP) is supported on Android and macOS.

Just one tunneling protocols supported are OpenVPN over TCP and IKEv2 over OpenVPN, even on those programs that support both (UDP).

Only by forcibly activating the TCP override setting is this possible.

When you choose a country, the algorithms “racing each to see who’ll join first,” as they put it on their blog.

This level of automation may be welcome to those who aren’t as skilled with technology, but it seems odd to eliminate the manual selection option.

IKEv2 and OpenVPN (UDP), two completely different protocols, are together despite their distinct purposes and advantages.

While the Google Speed Test tool recorded an average download speed of 50Mbits/sec while the VPN was turned off, it dropped to 35Mbits/sec when we connected to a TunnelBear server in the U.K.

That’s a significant decrease. However, there’s still plenty of space for online activities like surfing and streaming.

Changing to a server in the United States produced greater speeds, which may be related to TunnelBear being based in North America.

Compared to previous tests, this one showed a significantly higher download speed for a Windows 11 VPN, at 38Mbits/sec on average, but it was still not upto the mark.

This time, the U.K. server provided significantly faster rates than the U.S. one (83.5Mbits/sec vs. 94Mbits/sec).

Our tests have shown that most Android VPNs can achieve speeds above 100 Mbps.

While TunnelBear’s connection speeds are not acceptable for most users’ needs, they don’t set the service apart from others.

As we’ve noticed, it doesn’t help that the split tunneling option isn’t available for desktop clients — unless it all passes over the VPN, or none of it does.

If you are looking for a high speed, then Nord VPN is highly recommended.

Another problem with TunnelBear is that it operates on an extremely restricted (small) server network.

As of the writing of this TunnelBear VPN review, the company offers connections from only 23 different countries.

You will notice this issue most if you require a VPN for the United States or Canada that offers a wide variety of server locations.

Furthermore, you are limited to a single connection option in the TunnelBear Vpn connection: the United States.

The U.S. server is in California, according to our tests. It appears that Toronto is hosting the Canadian server.

Think about switching to a VPN service, like NordVPN, that has more server choices.

TunnelBear is situated in Canada, which initially intended that the company was a no-go whenever it related to torrenting.

This about-face came with the much-appreciated confirmation that the provider is absolutely no-logs, rendering time-correlation attacks obsolete.

This also means that if the Canadian government ever comes knocking, TunnelBear will have no useful information to hand them.

TunnelBear has its own anonymity technology (sometimes referred to as “stealth mode”).

So that you can get around VPN censorship, GhostBear disguises your OpenVPN traffic from your ISP.

This is especially useful in countries with strict internet censorship regulations, such as China, Iran, and the United Arab Emirates.

To hide VPN traffic from an ISP, GhostBear can either use TCP via port 443 or obfsproxy, both of which the user can choose to activate.

Dropped VPN connections expose you to danger on the Internet and are a regular VPN issue. Worse, you may be unaware this has even occurred.

If this happens, the VigilantBear kill switch in TunnelBear will prevent other network or web access until the VPN connection is restored.

Though a virtual private network (VPN) should always be used when connecting to a cellular internet, TunnelBear’s Trusted Network functionality allows you to manually disable VigilantBear when connecting to protected networks like those at your home or workplace.

Because of this, losing your internet service on a secure network won’t result in a total blackout.

Using TunnelBear with every app is unnecessary, as you don’t need to always connect to a VPN because of trusted networks.

Using SplitBear’s split tunneling function, you can control which apps go through it.

There are two key benefits of using split tunneling:

However, this comes with the risk of having non-VPN traffic intercepted by third parties.

You need a clear policy on when, when, and how to deploy split tunneling in your organization.

Most of TunnelBear’s competitors provide split tunneling on many platforms; however, SplitBear is exclusively available on Android smartphones.

The Netflix app does not currently support TunnelBear. Numerous attempts were made to connect to Netflix through US-based servers, but to no avail.

A few tips, such as stopping and rejoining the VPN several times in the hopes of acquiring a Netflix and amazon I.P. address, can be found on TunnelBear’s Frequently Asked Questions website.

The recommendation was useless.

We also tested out Netflix by connecting to their international servers in the United Kingdom, Canada, and France. They were also useless.

Our experiences trying to access alternative streaming services were mixed. When streaming Amazon Prime Video, a Canadian server was the only one functioning.

Even Hulu was inoperable. Additionally, the U.K. server had trouble connecting to BBC iPlayer but could watch other UK-based channels like All four and ITV Hub.

All in all, the outcomes of using TunnelBear were inconsistent. When it comes to streaming, it’s not the safest alternative.

Sadly, Toronto, Canada, is home to TunnelBear, and as a member of the dreaded five-eye alliance, it is one of the most dangerous jurisdictions to do business.

In case you didn’t know, Five Eyes is a group that works together to collect and exchange intelligence gathered through spying on regular persons such as you and me.

Jurisdiction is a critical issue that must be carefully considered.

Unfortunately, you can’t use TunnelBear as a VPN if you install it on your router. It would not be a huge problem if this weren’t something you would do.

You’ll have to look elsewhere if you want the extra security and convenience that a VPN can offer in this context.

Three price tiers are available: free, unlimited, and teams. Compared to the $5.75 per member per month that a Teams subscription costs, the monthly ” Unlimited ” price is only $3.33.

TunnenlBear does have a free tier, but you’ll quickly reach your limit with just 500MB of traffic each month, so it’s best to upgrade once you’ve had a chance to play around with the app.

You might get 6 hours out of browsing, but if you stream anything, it won’t be for more than an hour.

With the Limitless plan, you get unlimited bandwidth and top-tier customer service. The monthly plan costs a relatively average of $9.99.

For example, if you sign up for an annual plan, you’ll only pay $4.99 per month, while the three-year plan will only cost you $3.33 per month, making it a very cost-effective and competitive option.

Unfortunately, the free RememBear password manager was previously included for anyone who signed up for a three-year membership.

The subject of backing comes up last but is by no means the least. Very little help is available for TunnelBear:

In contrast, it seems as though there is currently no clear way to contact support through email or create a help request, at least for those of us on the free plan.

With no refund policy in place, this is a huge drawback.

They’ve done a fantastic job of making it challenging to connect with an actual person who can assist you.

This TunnelBear review VPN contains helpful information, such as a rundown of the service’s key features and set-up guidelines.

It doesn’t make comparisons with the top VPNs. It has a limited number of servers, sluggish long-distance speeds, and failed to bypass geoblocks on any leading streaming services.

So you better look for a better alternative, such as NordVPN. A reliable and consistent resource NordVPN is a top virtual private network (VPN) service.

Using this VPN includes unlimited bandwidth, complete anonymity, and a no-logs guarantee that an independent third party has validated. 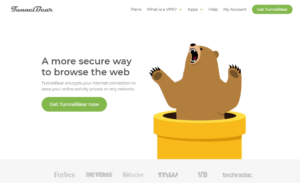 To know more about our findings, check out our TunnelBear VPN review. 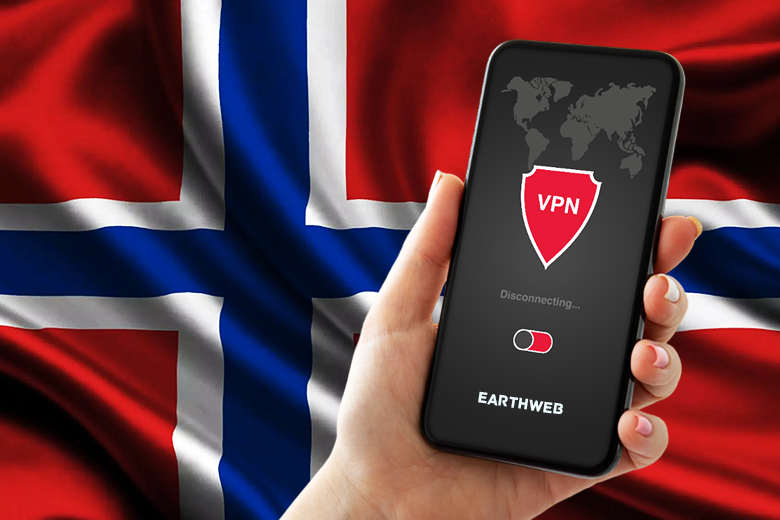 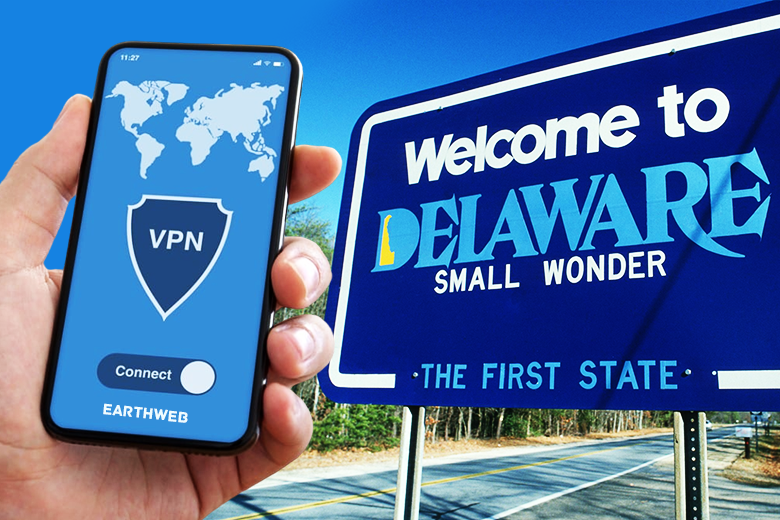