Last Updated: November 8, 2022
How many people use Google Chrome? Let’s find out with this in-depth guide on the latest Google Chrome statistics.
208
SHARES
FacebookRedditLinkedinTelegramWhatsappTweet Me 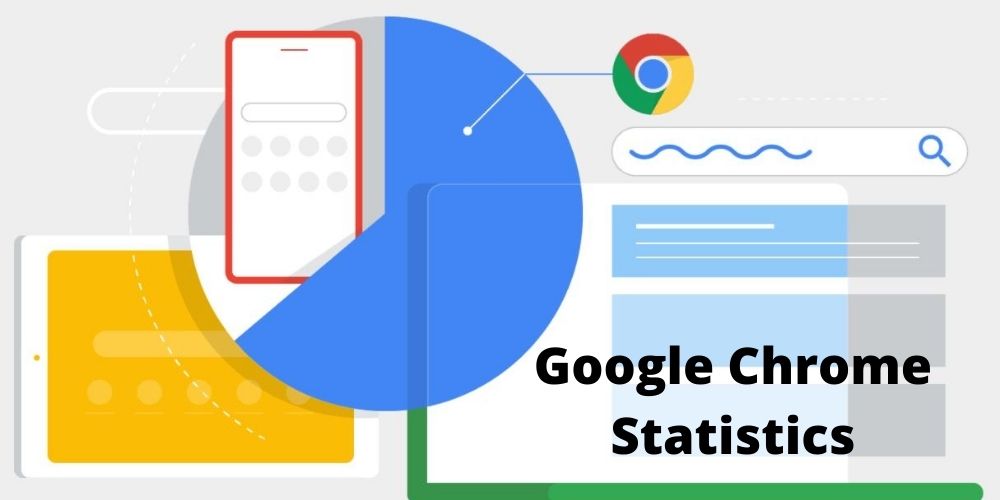 How many people use Google Chrome in 2022?

Around 2.65 billion people use Google Chrome.

Whether we talk about watching videos or reading articles online, chatting with our loved ones, or getting updates from an important news source, Google Chrome is everywhere.

The Google Chrome statistics for 2022 really speak for themselves.

How many people use Google Chrome? The figure for global users is 2.65 billion, and has been following an increasing trend for years.

We’ve got even more stats.

But before we jump into them, why not quickly get introduced to the browser itself, although you probably have a good idea of what we’re talking about.

Chrome, developed by Google, is a superfast, secure, and easy-to-use cross-platform web browser. It was first launched in 2008 and was available only for Microsoft Windows.

However, over the next few years, it made its way into the world of macOS, iOS, Android, and Linux.

Here is a detailed list of useful Google Chrome statistics for 2022.

Google has been dominating the web browser space since it released its first version of Chrome back in 2008.

However, Safari, the second most popular web browser, has a market share of only 19.37%.

According to Google Chrome statistics, Google Chrome holds a slightly lower share of the web market among mobile users than it usually has.

Nevertheless, it has a market share of 62.48% which is more than half of the web browser market. It has been increasing since it was first released for mobile in 2012.

3. Talking About the Tablet Web Browser Market, Chrome only Has a Share of 42.5%

While Google Chrome is the most popular web browser among different kinds of devices, it comes second in the tablet browser market.

Although Chrome is the second most popular, the difference between Google Chrome and Safari (the most popular tablet web browser) is not that high. Safari has a market share of 43.52%, while Google Chrome has 42.5%.

Google Chrome is still the most popular web browser, followed by Safari and Edge if we only look at desktops.

According to various surveys conducted in 2021, including Google Chrome statistics, Google Chrome has a desktop market share of 68.76%.

5. Around 2.65 Billion Users Use Google Chrome

But, how many people use Google Chrome?

As a matter of fact, in the last 6 years, Google Chrome has added nearly 1.36 billion new users.

6. More than 40% of The Internet Users of China Use Google Chrome

Chrome is one of the most popular web browsers worldwide, and China is no exception.

With 45.13% of the overall market shares of internet browsers, Google Chrome tops the list of widely used browsers. Talking about mobile browsers, Chrome holds a market share of 49.15%.

7. Chrome Is the King of Web Browsers in The Indian Market

With 85.84% of the overall market share, Google Chrome undoubtedly tops India’s browser market across all devices. Similarly, it holds a mobile market share of 85.32%.

Moreover, Opera and UC Browser are the second and third most-used web browsers across India.

Similar to other countries across the globe, Google Chrome comes first in the list of most-used internet browsers in the United States.

Chrome holds a share of 46.32% of the US web browser market, which is significantly less than the worldwide market share enjoyed by Chrome.

However, unlike other countries where there is an upward trend in the web market share of Google Chrome, the United States market share of Chrome has been dropping since 2018.

9. Google Chrome Is More Prevalent Among Desktop Users in The US, with More than 55% of The Market Share

With a 55.01% share of the desktop market in the United States, Chrome is the most popular web browser, accounting for the majority of US desktop users.

Moreover, its closest competitor Safari has a desktop market share of only 19.15%. However, since 2019, it has only been decreasing.

10. with Less than 40% of The Mobile Market Share in The US, Google Chrome Fails to Make an Impact

Google Chrome has a market share of 35.86% in the United States, within the mobile category. It is the second most used mobile browser across the country.

Across the globe, there are a total of 137,345 Chrome extensions available for installation. You can download and install the same from the Chrome Web Store.

13. Chrome Has More than 70% of The Market Share in The Region of Asia

72 out of 100 users in Asia use Google Chrome as their primary browser, making it the most popular internet browser. Talking about percentage, Chrome has a market share of 72.72 in Asia%.

14. More than 50% of Internet Users in North America Use Google Chrome

The question of how many people use Google Chrome in North America remains relatively popular.

Although Chrome is the most used browser in North America, Safari is stiff competition. While in 2021, Google Chrome has a share of 51.33% of the market, Safari comes second with 33.52%.

15. Google Chrome Dominates the South American Market with Over 80% Share

Chrome is dominating the South American regions, with 82.72% of the internet users using the same for their web searches. Over the years, it has only taken a peek with no declining trend. Whereas, the second most used web browser is Safari, with only 5.91% users.

16. Chrome Tops the European and African Web Browser Market with More than 60% and 70% of Share, Respectively

Like almost all the regions, European internet users are also very fond of Google Chrome. Around 61.12% of the total internet users in Europe prefer Chrome to other available internet browsers. Similarly, With a market share of over 70%, Chrome is ruling the African web market.

Users throughout the world across Android and iOS platforms have downloaded the Google Chrome mobile app around 8.8 million times in January 2021. Among these downloads, 8 million installations came from iPhone users via App Store, while 800 thousand came from Google Play.

18. Chrome Has Over 5 Billion Lifetime Installs

This brings us to the conclusion of our detailed study about Google Chrome statistics and how many people use Google Chrome. Google Chrome is a web browser used for accessing web pages on the internet.

Created by Google, it was first released in 2008, and from that day onwards, its users have been increasing globally. Based on the statistics provided, it is obvious that Google Chrome is one of the most popular web browsers.

From this article, you’ll get to know some impressive facts about Google Chrome, including its usage, installations and downloads, usage-by-region statistics, and more.

If you have any issues, just let us know in the comments below. Furthermore, you can use the comment section to add more amazing statistics about Google Chrome.