Last Updated: September 23, 2022
This article will dive into detailed Discord statistics on usage, revenue and funding.
166
SHARES
FacebookRedditLinkedinTelegramWhatsappTweet Me 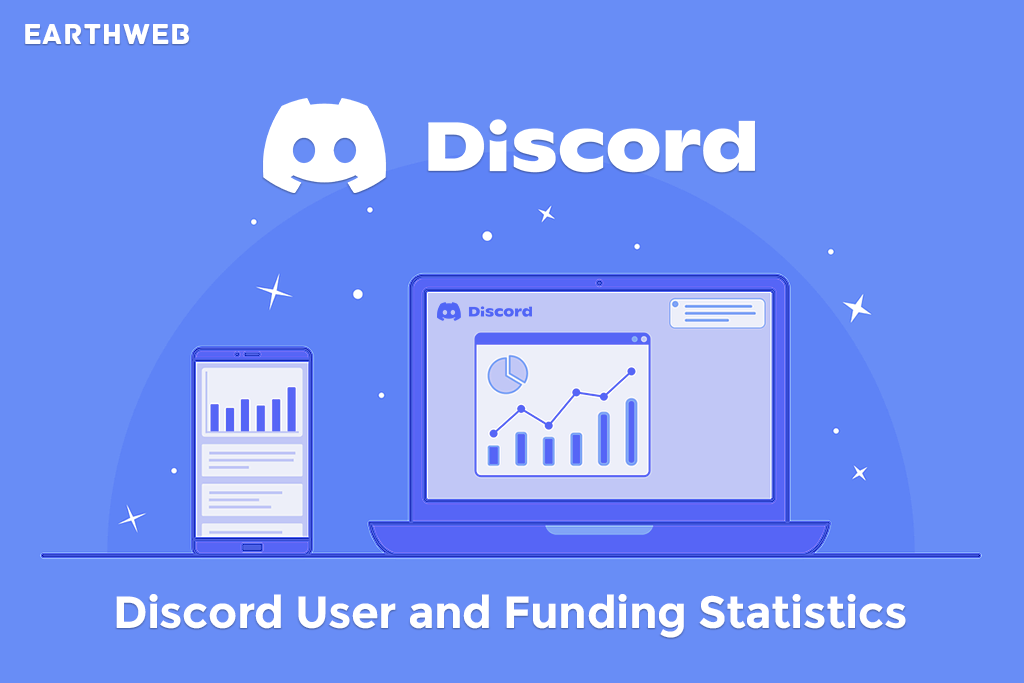 The Discord app has been around for quite some time and has primarily been a source of communication for gamers, alongside many other categories of users.

Discord has notably grown over the years and currently holds impressive usage statistics.

Every week, millions of servers on Discord are operational with tons of active users, ranging from video games, business, art, and many more. Moreover, the company has garnered over $482 million in total funding.

Detailed Discord statistics show that by the end of 2020, Discord had amassed over 150 million active users every month.

These Discord statistics guides will dive into more insight into Discord’s user and funding stats throughout the years.

Below is a list of the topics about Discord that we will be unpacking, including:

Average Time Spent On Discord in 2022

The platform’s users have no problem spending time with the application.

According to Discord statistics, the standard Discord user in the United States spends 280.6 minutes per month on the site.

That’s roughly 5 hours each month, or 9 minutes per day, to be precise.

Moving forward, this number is expected to increase with the applications’ popularity.

Although Discord has spent years creating new avenues for monetization, the company has generated a fair amount of money due to establishing a clear revenue strategy.

Discord Nitro was formed in January 2017 by the company, and for a monthly membership price of $4.99, users got numerous benefits over non-paying Discord members.

The platform continued to expand on this, and in October 2018, they rebranded that offer “Discord Nitro Classic” and introduced an improved “Discord Nitro” for $9.99/month.

They didn’t stop there, as  Discord launched Server Boosts in June 2019, which provided additional functionality to a server for a $4.99/month charge.

In addition, Discord has also introduced a vast selection of stickers you use for a fee.

You can see that Discord is on an upward trend as they reported $45 million in revenue for 2019 and $130 million for 2020, as found in Discord statistics.

From here, it’s apparent that this number will only go higher if they continue to satisfy their users.

Discord statistics were valued at $7 billion at one of Discord’s 2020 fundraising rounds.

Nevertheless, due to its increased popularity since then, this will alter dramatically with its positive trajectory.

According to online sources, Dragoneer Investment Group was planned to spearhead an investment that would value Discord at approximately $15 billion in August 2021.

Growth for the platform has been exponential within the last few years, and the pandemic may have had something to do with it since everyone was in quarantine for so long.

Aside from the companies internal endeavors with its application, Discord has had some other interests for Discord.

Discord has purchased three companies throughout the years to expand on its empire. They bought Blitz App in November 2018, Sentropy in June 2021, and Ubiquity6 in July 2021.

Blitz App is an AI-powered personal gaming coach for League of Legends, Valorant, CSGO, Fortnite, and a few other games.

Although the company started as a simple means of communication, they’ve grown an extremely loyal customer base and influence in their market space.

Although we don’t have day-to-day statistics on the number of messages sent, Discord has given us up-to-date information on the length of discussions in chat rooms.

Every day, Discord members spend an average of 4 billion minutes in conversations on their servers.

Since May of 2019, Discord statistics have shown that it has gone from 56 million monthly users to over 150 million and counting. This is another factor in allowing the company to raise funding over time.

Simply put, Discord has a proven track record, and that’s been dramatically benefiting their growth.

How Much Funding Have They Raised?

The company has raised a little over $483 million, with Series F being the most substantial funding round of $150 million in 2018.

The most recent fundraising round (Series H) raised $100 million in December 2020. This is the same as the previous round’s total in Series G.

Discord continues to prove its versatility with different functions permitted on the platform.

While you would not think of Discord as a live streaming medium, in February 2021, 14 percent of U.S. gamers acknowledged viewing video game live streams on the application.

Although Discord is not a specialized streaming platform, it is still the fourth most popular platform for video game streaming among gamers in the United States.

Furthermore, they’re increasing in popularity and could easily climb the ranks in favorability.

The company’s idea of having a different server for each group has grown so popular that the company currently has 19 million active servers each week.

Due to its growing popularity, Discord now competes with other major communication applications such as Google Chat and Microsoft Teams.

In addition, Mr. Beast has the most popular Discord server hosting over 700,000 members.

Usage of Discord Among Teens In The U.S.

First and foremost, 3% of teens in the United States prefer Discord as their favorite social medium.

While this is well behind leading social platforms TikTok, Snapchat, and Instagram, it puts Discord on par with, if not ahead of, companies such as Facebook and Twitter.

Discord has seen all of this outstanding success within recent years, and it might make you wonder if their employees are treated well.

Considering all of the fantastic work they put in, it’s only fair they’re compensated for the stellar work everyone enjoys.

According to Comparably, the average pay for employees at Discord is  $131,679 per year or $63 per hour.

Discord might still be a relatively new social media app, but it has now grown to the point where it has more than 350 million users who are registered, and 150 million of these are monthly active users.

You can now run Discord on Mac, Windows, iOS, Android, Linux, and most web browsers.

Their biggest growth came in 2020, when they increased from 56 million users every month to 100 million before benefiting from a further increase of 50% in 2021.

Clearly, these Discord statistics show that the virus has given people a lot more time at home to spend on social media apps.

Discord has maintained a solid uptick in registered users over the last few years.

Discord Users Sent Over 850 million Messages per Day in 2018

If you thought that it’s been just a couple of years since Discord became popular, you would be wrong.

Back in 2018, Discord was still doing pretty well, but fast forward to 2020, and the platform said that users had sent more than 963 million messages every day.

This means that the number per month is 25 billion.

We don’t have more recent Discord statistics on this, but we predict that the numbers have increased even more since then.

Discord isn’t coy about their statistics around the number of messages sent, and the length of conversations.

Every day, Discord users average 4 billion minutes when it comes to server conversations.

However, in early 2020, Discord experienced a peak in concurrent users, which was as many as 2.6 million.

Of course, this number is going to be higher at this point, but looking back, this is still a very impressive statistic.

Discord has some pretty unique features, which is one of the reasons why it has grown in popularity so quickly.

The idea of having a separate server for each group is so popular, that there are now 19 million of them that are active on the platform per week.

This massive increase in popularity means that Discord is competing with other communications apps, including Google chat, and Microsoft Teams.

Discord Has Managed to Raise $482.6 million in Funding

What’s really interesting about these Discord statistics is that different sources disagree when it comes to the exact number as far as their funding goes, but according to one statistic, Discord has managed to raise over $400 million as of early 2021.

This money came from 12 funding rounds, with the most recent raising $3.3 million. The lead investor of this funding round was Sony.

Again, this Discord statistic is now a couple of years old, and these days, it is considered to be worth around $15 billion.

These are the kinds of Discord statistics that really shine a light on how popular the server app has become, and how popular it is predicted to be in the future as well.

Discord has been working hard behind the scenes to not only increase its value but expand its ownership as well.

As a result, it has acquired three businesses over the last few years. These are Blitz App, Ubiquity6, and Sentropy.

One of the things about Discord that makes it stand out is how smart it is.

The developers behind Discord understand the potential that it has, which is why they recently turned down an offer to buy the app for $12 million.

We don’t believe that they are in a hurry to sell, because they want to see it through a bit further.

At times, Discord has struggled to pin down a clear monetization model, but despite this, it has still managed to make some serious money.

The developers of Discord introduced a monthly subscription fee of $4.99 in 2017, which of course gave subscribers advantages over Discord members that weren’t paying for a subscription.

As a result of these adjustments, Discord managed to make $130 million in 2020, which was an increase of 188% on the previous year.

The Average Discord User in the US Spends 280.6 Minutes on the Platform a Month

As you can see, people aren’t just logging into their Discord app, and then going on about their day.

Discord users actually spend a serious amount of time chatting on the social media server. 280 minutes a month is almost five hours, which boils down to roughly 9 minutes a day.

3% of Teens Say Discord is Their Favorite Platform

What’s really interesting about Discord is that it has managed to resonate with the younger crowd.

You might consider other social media sharing apps like TikTok and Instagram true social media platforms, compared to Discord, but 3% of American teens would disagree with you.

Considering how many other social media platforms there are out there that are specifically designed to appeal to teens, this is a pretty impressive Discord statistic.

No one knew the pandemic was coming, and companies like Discord didn’t know how certain aspects of this event could propel their business forward.

When lockdown hit countries worldwide, forms of communication were reduced to virtual means only, such as platforms like Discord.

These Discord statistics for 2022 show that it has allowed them to grow faster than expected, and the future for the company has never looked more profitable.