How Many People Use HalloApp in 2022? (Statistics)

Last Updated: July 22, 2022
How many people use HalloApp? We will be addressing this question here, and other pertinent things about HalloApp you want to know.
166
SHARES
FacebookRedditLinkedinTelegramWhatsappTweet Me 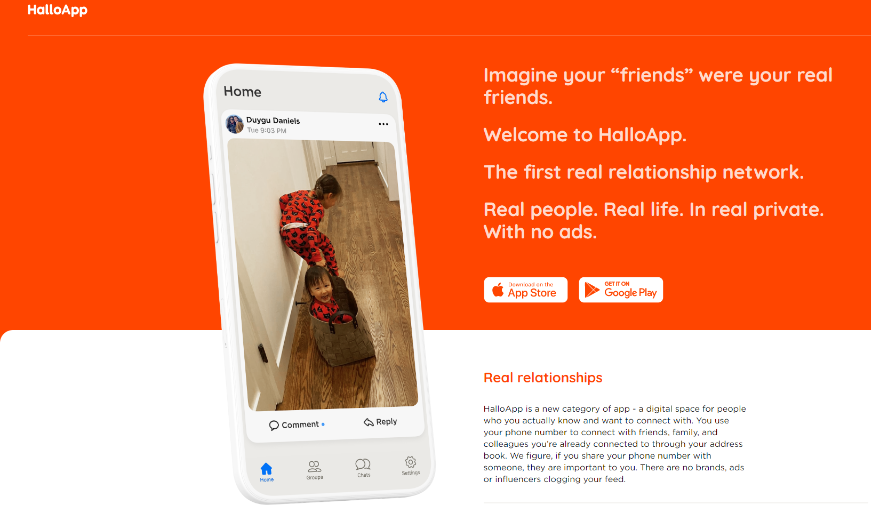 How many people use HalloApp in 2022?

HalloApp has had at least 225,000 downloads across Android and iOS.

How many people use HalloApp? We will be addressing this question here today, and other pertinent things about HalloApp you want to know.

Let’s start by how it started and what it is, shall we?

HalloApp was created and developed by two former WhatsApp employees in 2017.

This app is an ad-free and private social media network that markets itself as the ‘first real relationship network”. What does that even mean?

Michael Donahue and Neeraj Arora created the app in 2017, but it was started in late 2019.

Neerjah played a role in negotiating the sale of WhatsApp back in 2014 to Facebook, now called Meta.

After doing so, Neerjah noticed that Facebook’s advertising model wasn’t doing anything to serve its users, so he created an alternative, which is known as HalloApp.

In case you didn’t know, HalloApp doesn’t have ads.

HalloApp also doesn’t control the social feed with an algorithm that won’t allow group chats with over 50 people.

Instead, when you open the HalloApp app, you are given tab options like settings, a home feed of posts from only friends, group chats, and direct messages.

Now that you have some background about HalloApp, let’s find out how many people use Halloapp.

Resource Contents show
1) How Many People Use HalloApp in 2022?
2) What Makes HalloApp Unique?
3) What Do You Get to Do on HalloApp?
4) How Does HalloApp Make Money?
5) What Does the Future Hold for HalloApp?
6) Conclusion
7) Sources
7.1) Related

How Many People Use HalloApp in 2022?

HalloApp doesn’t release their user count, but Protocol online reported that by November 2020, HalloApp had 225,000 downloads across Android and iOS users.

So, we know they have at least that many people potentially using the app.

We may not have any exact user numbers for HalloApp, but we do have plenty of pertinent information to share about the app that isn’t kept private.

Ironically, user privacy is one of HalloApp’s primary purposes.

Let’s discuss more about HalloApp to find out if this is a social media app you might like.

According to its co-founders, the giants of social media have left the idea of connecting family and friends to become platforms full of brands, athletes, shopping, and celebrities.

How many people use HalloApp relates to its uniqueness.

One opinion is that Facebook, Instagram, Snapchat, TikTok, and the rest of the giants of the social realm have become more like shopping malls where you might hang out with your family and friends sometimes.

HalloApp was created with a social platform based on your phone contacts to really connect family and friends in ways that other social media won’t.

Also, there are no ads on HalloApp like the ones that interrupt your experience on other platforms and apps.

Another aspect of HalloApp that sets it apart from others is its focus on encryption and privacy.

The apps About page mentions that this app is designed as a private space where you can connect and share the things in your life that matter with your real family and friends.

The end-to-end encryption for video and audio calls from HalloApp is unparalleled in the industry. This is a relatively new option for HalloApp users.

Since the popularity of video calling is so high, this could help further catapult this app and drive more users to it. These chats are private chats.

What Do You Get to Do on HalloApp?

The simplicity of the HalloApp app and its options is another part of its distinctive nature. Essentially, the app is segmented into four primary groups.

When you open the app, you are greeted with four tabs that allow you to engage in one of these four ways.

You can change your settings as needed, engage in group chats, engage in an individual chat, or check out your home feed.

Your home feed isn’t loaded up with ads and people you don’t know. It’s not loaded with “suggested” content either.

What it is full of is posts that your family and friends have shared. That alone should help with how many people use HalloApp coming soon.

The app is simple, with a minimal aesthetic, allowing you to focus on engaging with your family and friends without distractions.

No algorithms will be sorting chats or posts.

Just think about how your feed would look if it wasn’t inundated with ads and people you don’t even know.

According to the co-founders, the plan is to eventually charge a subscription for extra features, much like the former WhatsApp employees worked with on WhatsApp.

Currently, HalloApp is being run by 12 people.

How Does HalloApp Make Money?

First, how many people use HallpApp now has nothing to do with how they make money.

However, that’s something for the future of HalloApp. Let us explain. Right now, no data has been released on how the app stays in business.

It’s believed that the 12-person company has investors and are working toward turning it into an app more like WhatsApp was before it was sold to Facebook/Meta.

Therefore, it will eventually get revenue from subscribers via user-generated live streaming and group lessons.

Their mission is to empower its people to discover more opportunities in their lives and to make their dreams come true via language.

What Does the Future Hold for HalloApp?

As we mentioned, the plan is to create a revenue stream or two through paid content on the app.

Besides that, Arora says they plan to keep evolving the app and features while maintaining its simplicity and utility-focused operation.

Other than that, they plan to scale, like any business should.

However, it won’t be to create a boutique app, but to give as many people as possible a private and safe place to engage online.

How many people use HalloApp is important to the co-founders, and it’s not all about the money.

This is just one more thing that makes the app unique. That comes from its co-founders ideals.

After reading about HalloApp, you should be more aware of at least the estimated user count that relates to how many people use HalloApp.

We hope you have learned something new about HalloApp, its co-founders, and its future.

Do you already use HalloApp? Now that you have more information, will you give it a try?

Do you think the ideals of its co-founders will catapult it to success?